DHADI, one who sings vars or ballads to the accompaniment of a musical instrument called dhad, a drumlet held in the palm of one hand and played with the fingers of the other. A concomitant of dhad is the sarangi, a stringed instrument. Dhadis, patronized by chiefs and princes, eulogized the deeds of valour of the members of the families they served or of popular folk heroes. In the Dasam Granth (Charitra 405), their origin is traced back to the mythological combat between Mahakal and Suasvirya, the first ancestor of the dhadis being born of the sweat of the former.

Although the institution of dhadi dates back to time immorial and Guru Nanak (1469-1539) has recorded himself in the Guru Granth Sahib as a dhadi singing praises of the Supreme Lord, yet history mentions Bakhshu (d. 1535) who was patronized first by Raja Man Singh Tomar (1486-1516) of Gwalior and after his death by the kings of Kalinjar and Gujrat, as the first dhadi.He is also credited with the invention of a new raga which he named Bahadur Tori after the name of Sultan Bahadur of Gujrat, who was his patron during the last years of his life. In the Sikh tradition, dhadis have flourished since the days of Guru Hargobind (1595-1644) who engaged some leading exponents of the art to recite heroic balladry at Sikh assemblies.

The two names recorded in old chronicles are those of Abdullah and Nattha, of the village of Sursingh, in present day Amritsar district. Among the leading dhadis of the time of Guru Gobind Singh are mentioned Mir Chhabila Mushki and Natth Mall. Dhadis have continued to be popular and at larger Sikh divans, especially honouring the memory of heroes and martyrs, they are listened to avidly as they render in ringing folk tunes their deeds of gallantry and sacrifice. Natth Mall, who also composed a var entitled Amar Nama, originally in Persian and later translated into Punjabi by Dr Ganda Singh, is said to have been in the train of Guru Gobind Singh at the time of his journey to the South. 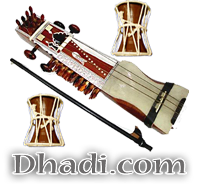 ABOUT US
Dhadi One Who Sings Ballads Using Dhadd And Also Sarangi, The Folk Instruments Of Punjab. According To Kahn Singh Nabha's Mahan Kosh The Definition Of Dhadhi Is, One Who Sings Ballads Of Warriors Playing Dhadd. Dhadi's Are A Distinct Group/Singers Emerged In The Time Of Sikh Gurus.
Contact us: info@dhadi.com
FOLLOW US
© 2020 Dhadi.com